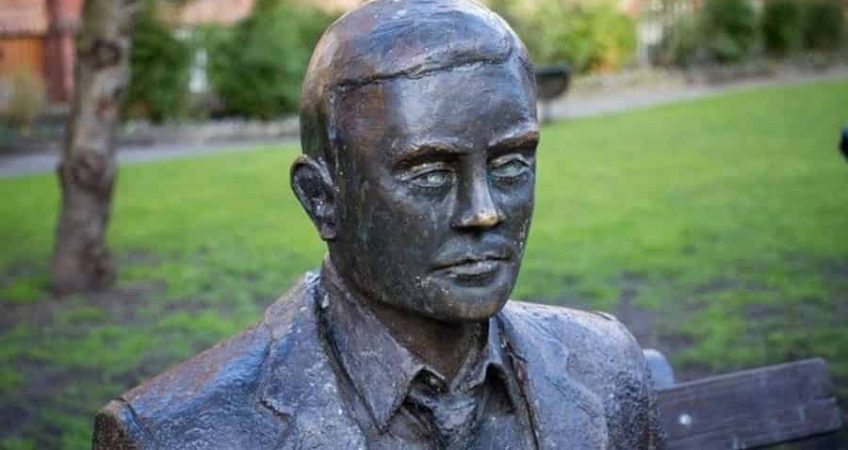 Celebrating the legacy of Alan Turing

This month to celebrate Pride Month 2021, which focuses on celebrating the LGBTQ+ communities all over the world, we thought we’d look at one of the key figures of Britain’s war effort – the mathematician and pioneer of theoretical computer science and artificial intelligence, Alan Turing.

World War Two history is a subject close to our hearts here at Finders International because we so often stumble on it when researching the lives of people who have died without leaving a Will Whether that is their parents or other relatives who played key roles in the war effort or the work we did to find the descendants of the crew of a Lancaster bomber who were all killed when returning from a successful raid on Germany, the topic is something we enjoy researching.

So who was Alan Turing?

Born in 1912, Alan Turing was instrumental in breaking the German Enigma code during World War Two, eventually leading to the Allied victory over Nazi Germany. He died in 1954. An official inquest recorded his death as suicide, but his demise could have been accidental cyanide poisoning. In 1952, he was prosecuted for “gross indecency” and avoided a prison sentence by accepting chemical castration, which left him impotent.

Alan’s teachers marked him out as special from his early years, where two of them noted that he was a genius. He was interested in chess and would spend hours working out complex chess problems all by himself. At his secondary school, he formed a close relationship with another student, Christopher Morcom who died in 1930 from tuberculosis. Turing dealt with his grief by devoting himself to scientific study.

He attended King’s College, University of Cambridge in 1931 where he studied mathematics, took up rowing and became a successful long-distance runner. He graduated in 1934 with a first-class honours degree and was elected as a Fellow of the College at 22. He went on to further study mathematics at Princeton University in the US and obtained a PhD. While there, he developed the notion of a universal computer which could solve complex calculations—the foreshadow of the digital computer. He also studied cryptology, the study of codes and cyphers.

In 1939, he was asked to join the Government Codes and Cypher School, the British code-breaking organisation (now the GCHQ), which was moved to Bletchley Park when the UK declared war on Germany on 3 September.

His most notable achievement while there was cracking the Enigma code. The Enigma was an enciphering machine the German armed forces used to send their messages securely, and he worked with fellow code-breaker Gordon Welchman to develop the Bombe, a machine to decode all Enigma messages. He also worked with the Hut 8 team at Bletchley to decipher German naval signals, contributing to the eventual Allied victory in the Battle of the Atlantic.

After the war he was awarded an OBE for his services to the country and in 1949, he was made deputy director of the Computing Laboratory at the University of Manchester. He wrote about artificial intelligence in his paper Computing Machinery and Intelligence that was published in 1950, and in this he devised the Imitation Game, now called the Turing test, which is way of determining whether a machine can truly be called intelligent and has been a significant influence on research on AI.

In 1952, he was charged with gross indecency after reporting a burglary to the police where it later turned out he was in a sexual relationship with the perpetrator and he accepted chemical castration as punishment. His security clearance was removed, and he was banned from continuing his work with cryptography at the GCHQ.

He was found dead on 7 June 1954. The extent of his work was not fully realised until after his death. The annual Turing Award commemorates his impact on computer science and in 2015, a new national centre for research in data science and AI, The Alan Turing Institute, was created. He is also credited with designing the first computer chess programme in 1950 and he appears on the new £50 Bank of England note.

In addition, the Turing Law retrospectively pardons men cautioned or convicted of homosexual behaviour when homosexuality was a crime (the law was overturned in 1967 in England and Wales).

A thoroughly fascinating individual, it is difficult to resist the temptation to wonder what more he might have achieved had he lived longer.

Finders International trace missing beneficiaries to estates, properties and assets. To see a full list of our services, please visit our website. Alternatively, you can contact us via telephone +44(0) 20 7490 4935 or email [email protected].