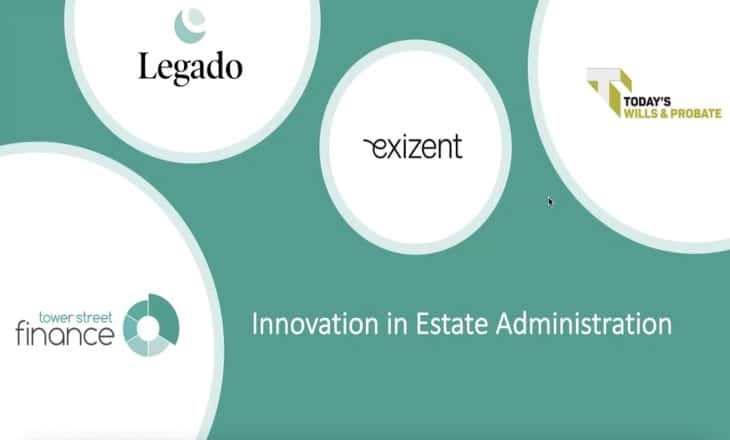 Responding to consumer needs and a feeling that now is the time that the estate administration space is ready to embrace innovation were key topics discussed in our recent webinar.

Legado is a digital vault for people to store and share important documents, files, wishes and memories, whilst Exizent aims to make probate easier by storing documents associated with the probate process in one place with easy access.

Tower Street Finance would like to thank David, Aleks and Josif and everyone who joined the webinar.

David Opie led a panel discussion which covered the inspiration for each of the businesses, why the time is right for innovation in the estate administration space, security concerns and what the future holds.

David asked the panel to drill down into why now is the time for innovation in this space.

All three agreed that as well as the general things that made innovation essential such as reducing costs, competing within the market and increasing revenue, there was also a desire for businesses to do a better job of customer service within a society which is increasingly digitally savvy. As people now expect to be able to make an order online and the goods to turn up that same day – moving them to a business where they are expected to work on a paper-based system just won’t be acceptable. It’s about expectations and building solutions which address both the client’s and the legal sector’s problems.

In response to being asked what the future consumer need looks like Dicky began by explaining that Tower Street Finance’s products have a consistent DNA which the business would stick to, and that it was looking at new products where customers are underserved at the moment and where other financial products that exist mean the consumer has to jump through hoops or just can’t access them.

For Aleks it was focusing on service-led solutions that were designed to solve real problems rather than forcing an idea on the market, and for Josif it was about bringing in more personalised and tailored approaches and recognising that everyone’s journey and need is different.

David asked the panel what the inspiration was for setting up their businesses.

The key theme which came through from all three in terms of why they set up was a desire borne of personal experience to help consumers and professionals solve issues they have during process.

Josif’s time working in corporate innovation in Silicon Valley and being inspired by founders and leaders of tech companies led him to want to launch his own business which helped consumers with their problems. He found that end of life planning was an area where families and individual suffered issues which sparked the idea that if people were organised throughout life it would make communications simpler and better organised with those that matter.

For Aleks it was personal experience of losing somebody close and realising the difficulties people face with admin, while also attempting to grieve when the person who’d died was not fully prepared. He knew the modern world didn’t need to be this way and felt there had to be better ways of managing data so that families can focus on the important things rather than dealing with paperwork.

Tower Street Finance was founded by a team who’d previously worked within the debt collection sector so had a huge amount of knowledge of people’s potential financial constraints. Dicky recounted the story of an elderly lady which paved the way for its first product. Her partner died leaving her many of his assets, but left the property she was living in to his sons from a previous marriage. They were keen to sell the house and with no income the lady didn’t have any way of moving out but said if she could access her inheritance earlier this would help – this was the ‘lightbulb moment’. After identifying a definite need based on research Tower Street Finance developed its products which are underwritten on the estate, not the individual.